When I am King: Cleaning Solution

There will only be one brand of soap and shampoo allowed.

I tried to take a shower the other day and found that there was no longer any room for me there. Instead, the space is taken up with 4 different kinds of shampoo, 3 different soaps, multiple facial cleansers, and several bottles of stuff whose purpose I don't even understand.

I think that if people are looking for the difference between men and women (besides the obvious biological ones, like the fact that women generally burp less and have hand coordination less suited to TV remotes), they need look no further than the shower stall.

As a guy, I feel I could make do with a hose and some soap. Heck, I could even fake it for a while with just some deodorant. But women apparently feel the need to have an entire chemistry set and several varieties of soap at their disposal at all times. I haven't worked out whether they actually use all of this stuff, or just have it around for backup in case there's an emergency.

What I really don't get, though, is that it's all different. In my mind, there's soap and there's shampoo. And shampoo is just liquid soap. So really there's only soap. So what's with all of the different bottles and bars strewn throughout my shower? And this isn't even counting the stuff on the counter outside the shower or in the bathtub.

A picture might help. Here's my rendering of a typical woman's and man's shower stall: 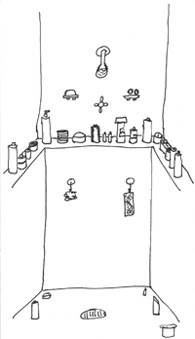 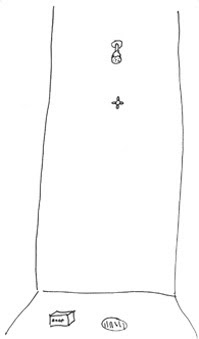 Woman's shower vs. man's shower
Compare these to the compromise shower of a couple:

Couple's shower
See my point?
All of the myriad of cleaning products is not only confusing for women and men, but these products are crowding us out of our showers entirely. My adminsitration will simplify things by allowing only one soap and shampoo product out on the market. Showers will be cleaner, simpler, faster, and more comprehensible, and these unnecessary cleaning products will cease to be a drain on our society.
Posted by Chet Haase at 3/29/2007