When I am King: Thank You for Reading!

Appreciation will be more automated.

I filled up my car at the gas station recently. When I finished the transaction at the pump, the machine asked me whether I wanted a receipt. When I hit the 'No' button, it told me to 'Please wait', and then a few seconds later it said 'Thank you!'

So not only did the machine feel grateful to me, but it wanted me to hang around waiting for it to get up the courage to say so. Why it took several seconds to get around to it, I don't know. Maybe it was shy, or spent time in some complicated algorithm to determine the appropriate parting sentence. Or maybe it considered cursing me instead, then felt better of it and left it at 'Thanks' instead.

In any case, it's clear that the machine appreciated my business with heartfelt digital joy.

Similarly, when I use the ATM, the computer is always happy to see me, using such statements as "How can I help you today?" and always signing off with "Thanks - we appreciate your business!"

I'm sure that we all enjoy this sort of camaraderie with computers and love hearing how they feel, especially when they feel good about us. How many of the humans that we interact with during the day say such pleasing and obsequious things?

Unfortunately, people are far more complicated and, frankly, depressing. A simple and rhetorical "How are you?" greeting may at any time end up in a discussion of that person's problems instead of just the simple "Hello" that you were hoping for. A transaction in a store could end up in a tedious conversation about the weather. And I don't know the last time I had the pleasure of an ATM transaction with a person; I challenge you to take money from someone and have them respond, "Thank you!" You'll be lucky if they don't call the cops.

When I am King, we will have more of these automated suck-up conversations, starting with the rest of the machines in our lives. Our cars, now equipped with useless information in the dashboard like average MPH, engine RPMs, and the fuel gauge, will instead display perky messages about how happy they are to take us places and how awesome we are in general. Traffic lights will display messages, like "Thank you for stopping!", "Thank you for going!", and, in the yellow light, "Thank you for speeding up!". ATMs will be joined by toilets in thanking us for making a deposit. And automated jail cells will thank us for staying there, wishing us a pleasant stay after another unsuccessful attempt to get some appreciation from a person by taking their wallet.
Posted by Chet Haase at 9/27/2010 1 comment:

Words to Live By

It's a Sunday afternoon. You're sitting around at home, wondering what to do. Should you scold the children for setting fire to their clothes hamper, or should you finally fix the leak in the bathroom that's causing septic seepage down the hallway?
Or should you, instead, fret about the state of the world? The world doesn't seem to be doing very well on its own, so it could probably stand to have some commiseration and ineffective pondering on the part of all people.
Floods, gas pipe explosions, incompetent politicians, celebrities with a blood-alcohol level higher than their IQ; these are the critical topics that occupy our thoughts until we finally turn on the TV to once again numb our mind into submission.
It's at times like this that the immortal words of Elton John come back to me:

And Jesus, he wants to go to Venus,
Leaving Levon far behind.
Take a balloon and go sailing,
While Levon, Levon slowly dies.

May we all find our own balloon. And go to Venus. Without Levon.
Posted by Chet Haase at 9/20/2010 No comments:

Does a vampire poet go from bat to verse?
Should a mortuary for couples be called "His and Hearse"?
Does getting hit with a handbag result in lips that are pursed?
Is the last of these rhymes much weaker than the first?

Email ThisBlogThis!Share to TwitterShare to FacebookShare to Pinterest
Labels: I Wonder, joke, poetry

Speaking of the book...

(This is a repost from my geek blog. Content from that other site doesn't normally show up here; it's far too hilarious for this serious forum. But I thought this one was worth cross-posting).

I ran across my new book, Flex 4 Fun, in the wild this weekend and managed to get some photographs. I thought that it might help you to understand how you might benefit from the book. Here are some ways that others have found it useful.
First of all, the book makes a lovely objet d'art, and was being displayed alongside other great works of art when I encountered it here: 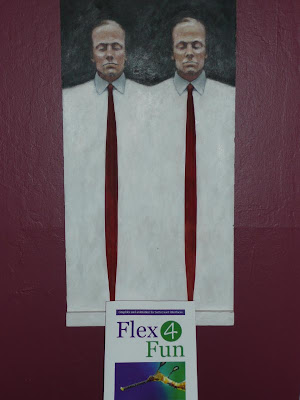 It also makes a nice decoration for some household areas, such as this aquarium: 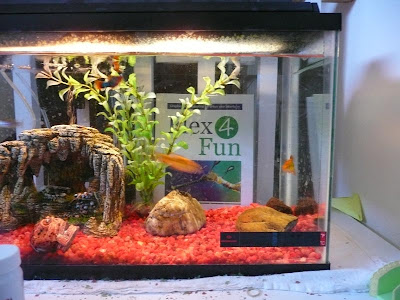 This person apparently found the code recipes useful in the kitchen: 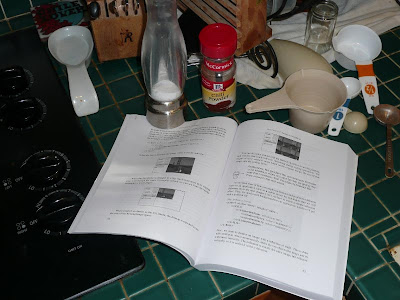 At 280+ pages, the book is a perfect size for some household tasks, such as leveling this piece of furniture: 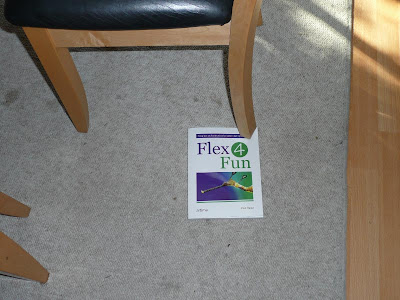 A good graphics algorithm is always music to the ears: 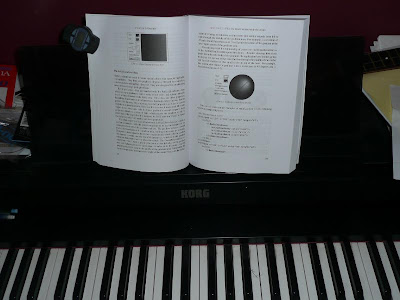 This family apparently found the book more interesting to watch on a Friday night than television or a movie: 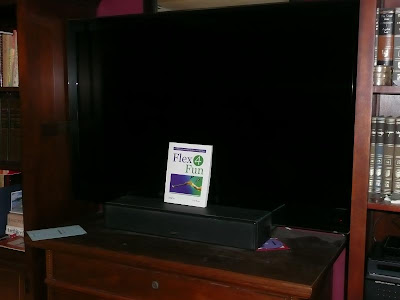 And of course the book looks great on a bookshelf, where it fits naturally with both the great works of literature: 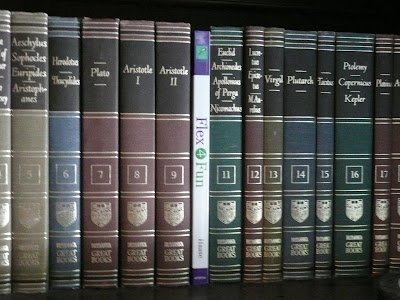 and the less great works of children's literature: 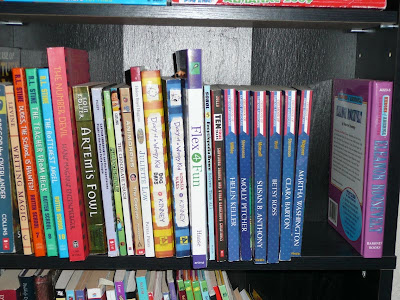 But the book won't stay on that kids' shelf for long: 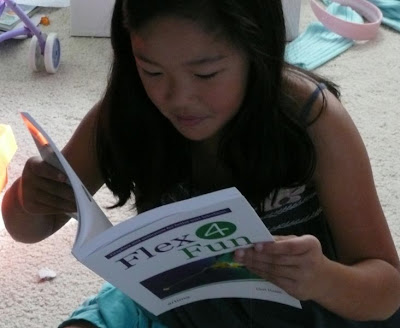 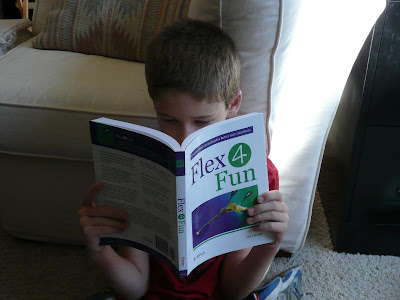 Even the family pet may enjoy the book - everyone wants to be an RIA developer: 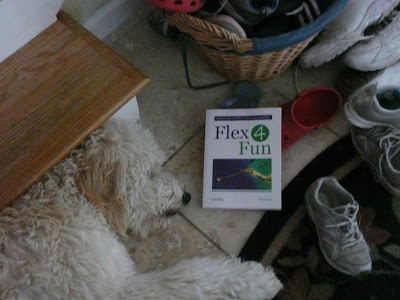 And finally, this Flex developer was so excited by the book's arrival that he bought two: 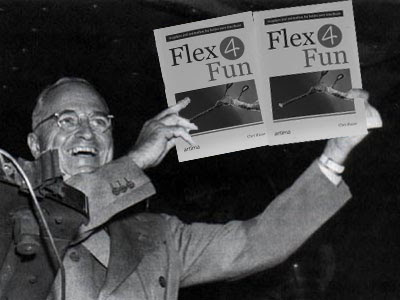 When I am King: Dry, Dry Again

Drying hands in the bathroom will return to traditional methods.

There's a growing trend in society, and in American bathrooms in particular, to stop using tried and proven mechanical devices when there are electronic ones available instead. In the home, this results in magnificent effort-savers like battery-operated pepper grinders (which are nothing to sneeze at). In the workplace bathroom, the result is sensor-driven devices for the toilet, the sink, and the paper towels.

I've written previously about these ridiculous devices, but today I want to come down harshly on the towel dispenser. I'll use, for my case study, an office bathroom with which I'm intimately familiar, having frequented it often in the past few months. Originally, there were two manual towel dispensers. These were complicated mechanisms that involved reaching under the dispenser and grabbing the dangling paper towel. When one didn't do it, you'd grab a second.

One of these machines was replaced recently by an electronic version of the same thing. This machine is roughly twice the size and has a little red light on it like a Cylon device (I'm never sure whether it's going to dry my hands or exterminate my species). Again, the towel hangs below the machine and you rip it off to get a second one delivered. From the user's point of view, there's no effort savings; on both you have to grab the towel. In fact, the electronic device requires more effort because you have that extra rip to perform, which can be difficult for your average technology worker. Also, you have to wait for the second towel because the machine has to think about it for a few seconds first, scanning you with its Cylon eye to deem your worthiness and consider its extermination options.

But here's the catch: the electronic one is often out of order. Either it runs out of power (it turns out that batteries don't last as long as, say, no batteries), or it runs out of towels, or it runs out of patience. I don't know. I just know that about half the time I go to get a towel, it refuses to spew one forth and I'm relegated to getting one from the older dispenser, which just keeps chugging along.

So here's this machine that obviously cost more to purchase and install, costs more to maintain as it runs through a Prius-load of batteries every month, takes up more space, and takes more time to get towels (when it's working) and to not get towels (when it's broken). And half the time it doesn't even work.

I understand technological advances. Why, if it weren't for my battery-powered pepper grinder, I'd probably have to go without that spice or eat the cloves whole rather than suffer that extreme wrist-twisting exercise. But I don't see why we're replacing perfectly workable devices for electronic versions which cost more and work less.

When I am King, we'll go back to traditional means of drying our hands. On our jeans.
Posted by Chet Haase at 9/09/2010 1 comment:

Is a crash in transition code a seguefault?
Posted by Chet Haase at 9/08/2010 No comments:

Life is a journey, ending in death. Enjoy the trip itself, because the destination sucks.

Success is what's left after all possibilities of failure have been exhausted.