Blood is thicker than water. But give it a good scrub and the cops will never know.

Charity begins at home. Or so my kids told me when they begged 5 bucks off me.

Cleanliness is next to godliness. But it's even closer to annoyingliness.

The early bird catches the worm. So sleep in, unless you like worms for breakfast.
Posted by Chet Haase at 3/25/2011 No comments:

The Day of Rest: Remix

A picture is worth a thousand words, so my cartoon last week on this subject only covered about half of what I had to say. Here's the complete story:

The Day of Rest
God came in to the office one day. He hadn’t been there in a very long time. Being omnipresent meant being everywhere at once, except at the office. He found it too stifling.

The place was deserted. He walked around the building for an hour, the only sound his sandals scraping the linoleum. Finally, as he rounded the corner toward reception, the front door open and Peter entered, in shorts and a t-shirt with the slogan “Soul Survivor.”

Peter stopped abruptly. He hadn’t seen the Boss in millennia. One of the attractions of his job was very little management oversight.

“G-good morning, Your Almightyness,” he said. “What, er, what brings you here on a Sunday?”

“WHERE IS EVERYONE!, ” God thundered.

It wasn’t that He was mad. It’s just the way He talked. It was awkward watching movies with Him because He always knew what was going to happen and insisted on telling you. And then nobody else in the theater could hear the show; He was just so loud.

“Yes, sir. Day off. At home. Practicing the harp. Meditating. That kind of thing. I just came in to grab something from my office on my way out. Sheila from accounting is having another lawn-bowling party this afternoon.”

“I don’t follow you, sir. Why the bowling? Well, it’s really the only thing to do up here, other than the harp. I’ve been meaning to speak to you about that actually, sir. We’re having a bit of a morale-”

“NO, YOU NINNY. WHY ARE THEY TAKING THE DAY OFF WORK?”

“Well, because it’s Sunday, sir. We’re always off on Sunday. And Saturday, ever since that strike about the un-divine working conditions back in the 40’s.”

“WHAT DOES SUNDAY HAVE TO DO WITH IT?,” God bellowed.

“It’s the day of rest, sir. It’s in honor of you:
‘On the seventh day, God finished his work. And so he rested on the seventh day.’
I don’t think the repetition is quite necessary, although it’s still better than that section with all of the ‘begats’. Anyway, we take Sundays off because you did. It’s a day of rest.

“REST? REST?!!!! SUNDAY WASN’T A DAY OF REST FOR ME. YOU TAKE SIX DAYS TO CREATE EVERYTHING OUT OF NOTHING AND SEE HOW FAR YOU GET. DO YOU THINK YOU’D BE DONE WITH ALL OF IT IN JUST SIX DAYS?”

“But sir,” Peter asked, backing up slightly to put a little more space between himself and the Creator. “You’d done it all by then. The book says you’d created light. Which, by the way, is a pretty excellent feat, if I may say so. How did you even know what it was you wanted? A real visionary, sir. That’s what you are.”

“Right. So on the second day, there was the firmament. To tell you the truth, I’m still not sure what that word means. It’s like ‘irony’; I think nobody understands the word, though everyone seems to use it. Which I find ironic.”

“Then there was the waters, and the lands, and the stars and moon. Then you went ahead and made all of the animals and then Adam and Eve.”

“STILL REGRETTING THAT DECISION. NO END OF BOTHER, MAN IS. AND DON’T GET ME STARTED ABOUT WOMEN. I’LL NEVER FIGURE THEM OUT.”

“THAT’S IT? I CREATE THE PLACE AND THE PEOPLE AND THEN I’M DONE?”

“Well, … yes. At least that’s what it seems like. And that’s what the book says. I mean, it’s not like you then needed to create aliens. So that pretty much wrapped it up, right?”

“NOT HARDLY! HOW FAR DO YOU THINK CIVILIZATION WOULD HAVE GOTTEN IF I’D STOPPED THERE? WHAT ABOUT ARCHITECTURE? ELECTRICITY? MACHINERY? LITERATURE? OR A REALLY GOOD BEARNAISE SAUCE?”

“I guess, sir, that I thought all of those things were all natural byproducts of mankind. Once you’d created them, they’d eventually come up with good ideas on their own.”

“IDEAS, YES. GOOD ONES? MANKIND INVENTED THE ELECTRIC PEPPER GRINDER. AND THE SPORT OF DRIVING IN CIRCLES FOR 500 MILES. YOU THINK THEY CAME UP WITH THE REALLY GOOD IDEAS?”

“No, I guess not. But what about the day of rest? The scripture is very clear on this.”

“GOOD. NOW GO TELL EVERYONE TO PUT AWAY THE HARPS AND GET BACK IN THE OFFICE. TELL THEM IT’S GOOD FOR THE SOUL.”

“Well, sir, it’s just that everyone sort of enjoys that extra day off. Gives you a chance to re-charge those wings, if you know what I mean.”

God looked at him.

“Uh, sure, sir. Although, now that you mention it, there are a few-”

“DO YOU LIKE IT UP HERE, PETER? BECAUSE I COULD CHANGE THAT FOR YOU.”

“I THOUGHT SO. NOW GET BACK TO WORK.”

“Yes, sir. And might I say how very wonderful it’s been seeing you in the office again, sir. It has been such a-”

“Goodbye sir. I’ll just go round everyone up.”

Peter jogged back out the front door, which slammed shut behind him, leaving God alone in the foyer. In the distance, a water cooler kicked on.

God said, “I HATE MANAGEMENT. WHY DID I EVER CREATE MANAGEMENT?,” and went in search of the coffee machine.
Posted by Chet Haase at 3/21/2011 No comments:

When I am King: Brochure Thing

Medical pamphlets will be more fun to read.

“It’s terminal.” These are the most horrible two words that your doctor might say to you, handily beating the runner-up, “rectal bleeding.”

My doctor didn’t actually say either of these winning phrases, but he did hand me a brochure last week that talked about how my shoulder problem was typically an issue with older, postmenopausal women. The brochure showed pictures of several such sufferers in beds. Obviously, either their shoulder pain or their advanced age made it impossible for them to get out of bed and change out of their nightgown. But I suppose that they’d retired thirty years ago and had nothing to do all morning but think about how their children never called and what kind of soup they’d like for lunch.

It’s not that I mind having injuries. I figure it’s part of being alive, especially in the high-risk, body-thrashing programming career that I’ve pursued for my entire adult life. And I don’t mind getting older because it’s better than the alternative.

But I do mind being mistaken for being even older and of the opposite sex. For one thing, I’d look awful in those nightgowns the old women were sporting.

The problem is the brochures. Handing you a pamphlet on your disease is the doctor’s way of telling you, “So many people have this problem that we mass-published thousands of these to hand out. So quit your whining, you baby.” It’s also a way for them to get out of actually speaking to you.

And these little booklets do help. Just looking at the pictures convinces me that I’m not doing that badly because I feel a whole lot better than the people in the pictures look. But they don’t make me feel very good about whatever I’ve contracted; the pictures of body parts and the clinical descriptions of maladies go a long way toward making me feel like I’m actually sick, instead of just suffering a temporary setback.

When I am King, medical brochures will be more upbeat. They will teach about the problems and possible cures, but with a whimsical and positive tone that helps patients feel better, even as their bodies are falling apart, piece by piece. Introductory phrases like, “Everybody has spleen disorder!”, “Osteoporosis: today’s hot disease for hipsters of all ages!”, “If you can read this, you must be okay!”, and “Everybody dies!” will help the inspire the readers to read on. Pictures of happy, young people playing Frisbee from their walker, acting as King Lear while wheeling an IV stand, or putting attractive makeup on gangrenous patches will help the patients feel young, healthy, and optimistic, even as the nurse is reaching over to unplug their life support.

Life is a journey to a distant destination. We should do what we can to enjoy the journey itself, because from the way the old women looked in that brochure, the destination sucks.
Posted by Chet Haase at 3/18/2011 No comments:

Sunday Comics: The Day of Rest 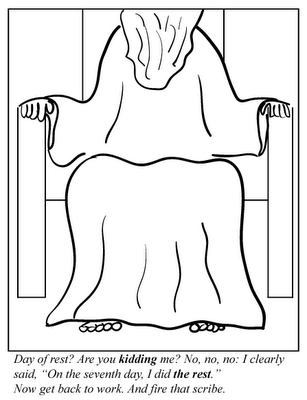 Discretion is the better part of valor. But it's the most critical part of cowardice.

Don't punch a gift horse in the mouth.

It takes one to know one. But it doesn't take anything to know nothing at all.