Both presidential candidates portray themselves as men of "change." After months of hearing this, I finally get what they mean. It refers to the spare change we'll have left in our bank accounts by the time they get elected.
Posted by Chet Haase at 9/30/2008 No comments:

Is shaving a rabbit hare-razing?

Do bunnies get hopped-up on weed?

If a rabbit's foot charm is so lucky, what happened to its former owner?

Q: What do you call a rabbit's many mates?
A: A harem

Everyone will buy my book.

From the avalanche of feedback I've had and the thousands of surveys my team has conducted, it is clear that The People demand a more readable format for the truly critical "When I am King..." treatises. Especially for reading when, er, resting in a restroom.

Or perhaps I just needed to see if I could publish a book slightly less geeky than my last one.

In any case, I've just published a collection of "When I am King" articles with the catchy title When I am King.... The book is everything that you've enjoyed in those blog postings and slightly more. Additional features unique in this book include:

Additionally, there is this one-time offer: I agree to sign your book if you happen to run into me (and I survive the crash).

The publisher assures me that the book may eventually be available in bookstores and online merchants everywhere, but it will take a few weeks to work through the system. I think they're probably hand-checking every page of every copy, to ensure that this epic tome is without defects and ready for the worldwide audience. In the meantime, you can get your copy at Lulu.com: 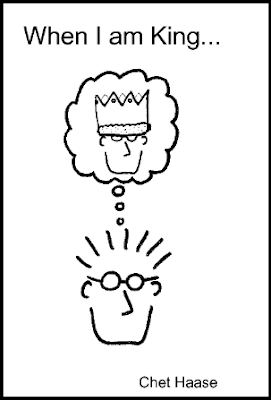 Note that the shipping costs hurt a bit if you're ordering just one copy, but that the per-copy shipping is less for larger orders. So order hundreds of copies to save big.

The current financial crisis in the U.S. makes me wonder:

Is it default of banks? Or of de administration?

Should we let the banks fail all a-loan?

Is nothing certain but debt and taxes?

Have the banks proven that if you lien too much, you'll fall right over?

It's "study the 49'ers" time of year in California schools, that part of our kids' education where we learned about the insane level of greed that made this state what it is. Good thing we're not like that anymore.

I figured it was also time for a little minin' humor, dig?


Q: What’s the difference between a huge gold vein and Britney Spears?
A: One is the mother lode, the other is one loaded mother.

Q: What did the gold digger say to his new bride?
A: What’s mine is yours.

Q: What did the man’s wife say when he left home for the California Gold Rush?
A: “Come back rich, ore else!”

Did you hear about the 49’er that was unable to find any gold?
He searched in vein.

Q: What’s the difference between getting a gold mine and a fancy dinner?
A: One’s a staked claim, the other is acclaimed steak.

Q: Why did the 49’er climb to the top of the mountain?
A: He heard that every cloud has a silver lining.

Did you hear about the 49’er that fell down the shaft?
He only suffered miner injuries.

Some 49’ers were good at mining, but most people couldn’t dig it.

Listening to this week's podcast of Wait Wait ... Don't Tell Me! made me wonder about some of the news items discussed:

KFC Shoring Up Security for Secret Recipe
Does the company suspect fowl play?

Facebook for Spies
Same kind of site, but different kind of character assassination?

Lance Armstrong Coming Out of Retirement
Apparently, Lance intended to re-tire, not retire.

I spent some quality time in an MRI machine a few days ago. Mostly because I thought it would be fun, but also because my Doctor wanted to see me stuffed inside a small tube.

Finally, I was stretched out on the table, heading into the machine and I understood; it's the smallest, tightest little room on the planet, and you feel like you're going into King Tut's eternal apartment. And the folks running the machine don't help that feeling. They could have a big door into the machine so that at least you might feel like you could open that door back up. But no: they slide you into the tube head-first, leaving only the feet sticking out. Now I don't know about you, but if something went wrong and I had to get myself out of a situation, my feet are the last things I'd trust to help me out. Beyond stubbing a toe, there's not much that they can do for me.

So there I am, shoved into this Chet-sized tampon applicator, trying to calm my nerves and convince myself that the tech isn't about to tickle my feet with a hypodermic full of cyanide, when the sounds start.

At first, it's just some clicking. Like a big metal dolphin. Or like they're trying to start the machine and the engine's not turning over. Then things start for real: all of a sudden, there's a huge, constant buzzing noise ZZZZZZZZZZZZZZZZZZ that the foam earplugs they gave me are doing nothing to stop. Meanwhile, I keep remembering the tech's advice: "stay still - don't move your neck." Easy for her to say: she's not stuffed into a coffin with the War of the Worlds playing around her.

After a couple of minutes of this, the tech's voice kicks in and tells me there's another test coming for 3 minutes. Then the clicking sounds. Then more loud buzzing, but different, like BZZ-BZZ-BZZ-BZZ-BZZ.... After that, another test for four minutes, again with the clicking, and again with yet another buzzing sound, loud enough to rip my head off if I hadn't been told to keep it still.

There were 3 more tests for a total of about 13 minutes, each one with its own unique buzzing sound and pattern. I felt like I was inside an 80's arcade game, when buzzing was about all that the games could do. The last one sounded like a video game sound track composed by Phillip Glass, if he'd only had two notes to work with and a sadistic agenda.

Finally, the tests were over and they let me out. They pulled me out of the machine slowly, just because they thought it'd be more fun for me to be in there for as long as possible.

I understand now what "MRI" means. Some people mistakenly think that it stands for "Magnetic Resonance Imaging," but I know better. It's actually an abbreviation for what you're thinking by the time you leave that womb of torture: "Am Are I?"
Posted by Chet Haase at 9/16/2008 1 comment:

I listen to the "Wait Wait... Don't Tell Me!" podcast on a weekly basis at the gym. It's not only funny: it's self-defense against the bad 90's pop blaring out of the overhead speakers. And it's my main source of important news.

At the end of each show, the panel is asked to come up with suggestions for what might happen in some relevant current affairs topic. This week's topic was, "What's the next big news bombshell to be dropped about either Vice-Presidential candidate."

I haven't yet been asked to be on the show, no matter how often I check email looking for their request, so I didn't have the chance to answer in person. But here's how I wanted to answer from my perch atop the elliptical running machine:

Sarah Palin will be joined next week by John McCain's selections for his Cabinet: boys and girls from a local preschool. This stunning move will serve several purposes and further the chances of a winning Republican ticket:

In oceans and lakes
And festering sewers,
Fishing's a sport
With many allures.

Though obviously not
Working out at the gym
The fish are all strong.
Their belief: "sinker swim."

It was the kid's first trip
He was totally new.
When the first fish bit,
He was hooked (the fish, too).

A couple more fish
Were caught on a spinner
But three trout was not quite
Enough for a dinner.

We stayed out till dusk
Dropping lines out for more
And finally came in with
Net profit of four.
Posted by Chet Haase at 9/08/2008 3 comments:

Did you hear about the guy in the eating contest that was disqualified for consuming the wrong things?
He threw up his hands in disgust.

Are chicken fingers cooked by hand?

Are frog' legs sold by the foot?

With the onslaught of political conventions in the U.S. lately, it seemed like a good time for a poem:

While they had peoples' focus
And cameras' attention
Both parties made choices
By vote and convention.

The followers all
Were geared up for the fight;
The potential for change
Is the power of 'might.'

The speeches were long
And went into the night
Boring the crowds
From the left to the right.

And then it was done
For the file and rank.
The leaders hit the road
To walk the party plank.

They trail is tiring
and causes much strain.
That's why politics
Is called a cam-pain.
Posted by Chet Haase at 9/02/2008 No comments: