When I am King: On Wedding Anniversaries

Wedding anniversaries will be celebrated with more appropriate gifts.

Anniversaries are supposed to be accompanied by gifts representing the time of servitude: paper, silver, gold, diamond. But what do these gifts represent, other than expensive drags on the savings account? We might as well give each other mortgages, or loan documents. These gifts seem aimed at preserving relationships through debt management and obligation, rather through bonds of love and appreciation.

When I am King, I will institute a system of more practical, or at least more representative gifts. Rather than saddling couples with debts far outweighing their emotional attachments, these presents will be truer to the nature of marital bonds. Let's examine recommended gifts for some of the hallmark years in a marriage.

Year One: The traditional gift is paper, which seems fine to me. Paper represents both an element of nature of the marriage as well as the danger of being easily dissolved and imminently flushable. But rather than just any piece of paper, I recommend a copy of the marriage certificate, which serves to remind your spouse both of the beginnings of your beautiful relationship and of their vows to actually stick around.

Year Five: The traditional gift is one of wood. To some extent, this material appropriate; it is organic, natural, and a more solid version of the flimsy paper tossed around in the first year. But I would instead recommend that the gift be more indicative of the strong bonds forged in your relationship: handcuffs. This gift is both metaphorical, signifying the fettering bonds of love and overwhelming responsibility, and practical, being able to lock down either spouse or both until such time as tempers cool back down.

Year Seven: The traditional gift is one of wool or copper. Which I don't get at all. You either give a scratchy sweater *or* some new plumbing fixtures? What are you implying by these gifts? I think the wool is closest to the mark, since seven is the year of the 'itch', when couples first start realizing how bored they are with their partner and how life would be far more interesting if spent with, say, the mailman or some random floozy seen in a dark bar after several stiff drinks. But rather than give a gift reinforcing that itchy idea, it seems far better to give one that addresses the problem; give itch relief. The gift can either be a back-scratcher or a large bottle of Calomine lotion. Remember: with marriage as with poison ivy, you can't possibly fix the root problems festering inside, but you can at least try to mask the symptoms and hope they go away soon.

Year Ten: Tradition suggests a gift of tin or aluminum. Here again, I would break with tradition. Giving cheap metals feels more like you're giving Jiffy Pop or foil-covered leftovers from dinner rather than a present of some significance. At this mature stage of the marriage, you should give a present of more weight and meaning:: I suggest rust. Rust expresses the paired feelings of being based on something solid at the core, while also exposing the inherent erosion and ugly decay on the surface.

Year Twenty: The traditional gift is china, which seems partially appropriate. But giving a new, complete set of china seems wrong; a marriage of twenty years is neither new nor complete, but is rather a basically workable set of miscellaneous pieces, held together through practicality and inertia. Also, a set of china can be a work of perfection and beauty, which is far from the ramshackle workings of a marriage of twenty years. I suggest, instead, an incomplete set of everyday dishes, all taken from different and random sets, and all somewhat cracked and abused. Like marriage, the set is neither beautiful to behold nor appropriate for fine occasions, but it is serviceable and able to withstand at least a couple more breakages before being completely dysfunctional and ready for disposal.

Year Twenty-Five: Twenty-Five years is a long time. A really long time. A really, really, really long time. In fact, twenty-five years, in marriage time, is more like 250 years or normal life. As such, this occasion demands something more significant than most other anniversaries. The traditional gift is one of silver. Apart from the fact that silver, if left to its own devices, will tarnish and look, like many marriages, soiled and abused, I find this gift unacceptable. For one thing, silver objects well cared-for will retain their early sparkle forever, which is quite different from relationships which have a hard time retaining their initial allure as far as the end of the church aisle, with the happy couple already drawing the battle lines about who's doing laundry for whom and whether the default toilet seat position should favor Him or Her. Instead of silver, I propose a gift more indicative of this point in the relationship: a fossil. These dead remains are significant both in their ability to carry on years after their usefulness and in their story of the ultimate end of the subject in question. Likewise, many marriages carry on for years after life expired and exist only insofar as their skeletal remains are still visible to any who bother looking for them.

Year Fifty: Tradition has it that gold is the right gift for this many years of wedded bliss, but I would suggest something more useful, meaningful, and thoughtful for both parties: a divorce. Hey, you both made it this far, you deserve a little bit of freedom before the rendering truck comes to collect the bodies from the stable. Go out into the wide world, meet some new people, try dating, and realize why you got married in the first place.
When you do get back together again, might I suggest a gift of paper for the first year.
Posted by Chet Haase at 6/28/2009 No comments:

In the latest Wait Wait... Don't Tell Me! show (my favorite podcast and, disturbingly, my primary source of world news), there was a discussion about the journal, "Obesity."

Mo Rocca, a regular panelist, wondered whether the magazine has centerfolds. I don't know, but if there are any, I'm pretty certain they have stomach staples.
Posted by Chet Haase at 6/25/2009 No comments:

If someone invents a beer that's good for your teeth, I propose the following slogan:

I believe that cannibalism is a personal choice.

I believe that drooling can be a form of flattery.

I believe that guns don’t kill people; bullets do.

I believe that dishwashers don’t double as catwashers.

I believe that banging your head repeatedly against the sidewalk doesn’t help you solve your problems, but it does help you forget them.

I believe that porcupines don’t make good footballs, after all.
Posted by Chet Haase at 6/20/2009 1 comment:

When I am King: On Birthdays

Everyone will get old.

Some people say that getting old sucks, but I disagree. Our bodies and minds are engineered to make sure that our lives improve as we get older. Sure, there are mishaps along the way. And debilitating illness and terminal disease may creep in to spoil the fun. But in general, life gets better as we slowly erode. Here are a few examples:

Memory:
Our memories fail as we age. This has several advantages. For one thing, we can’t remember how much worse we feel now than we did when we were younger. Also, we eventually forget our birthdays and even how old we are.

Alcohol:
We can’t drink as much as we used to, so it takes far less for us to have a good time. For that matter, it takes far less to bring on a hangover which must, by definition, mean that we had a fantastic time the night before.

Vision:
Our eyesight degrades, which has several implications. For one thing, our personal space expands since we can’t see people anymore when they’re too close. This prevents unnecessary contact and the spread of disease. Also, our eyes provide an automatic soft-focus filter to things that we see, making our loved ones look more romantic and our reflections look less wrinkly.

When I am King, aging will be celebrated with cakes and candles and insincere wishes for good health. Or do we already do that? I forget.
Posted by Chet Haase at 6/16/2009 No comments:

Although this Chicken anthem was posted in an earlier article, it was felt around the office that the underlying message would have more impact, especially with today's web-centric audience, in video form:
Posted by Chet Haase at 6/14/2009 No comments: 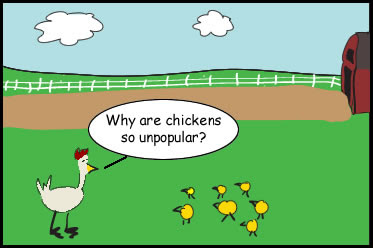 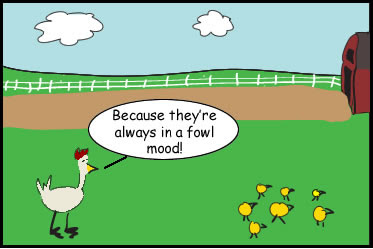 When someone at work says, “Great trip report!” what they’re really saying is, “You suck at everything else!”

Obviously, the ability for today’s Corporate Warrior to accurately digest and clearly communicate information is a critical skill on the Battlefield of Business. But when it becomes your defining characteristic, it’s time to start hoarding office supplies and packing up your desk.

Compliments, like financial reports, are more significant in what they don’t say. If someone reads some article you wrote and says, “Great piece!” you can take some amount of satisfaction that, even though they probably didn’t mean it and may not have actually read it, they did say that they liked it. As a whole, sum total, in entirety. On the other hand, if they read it and everything else you’ve written and take the time to point out a single sentence or word and say, “I liked that,” you should understand both that they may have liked that nugget … and that they didn’t actually like anything else in your vast volume of work.

Like most methods of personal attack, it is critical for today’s Corporate Warrior to hone this skill. The ability to superficially compliment co-workers while simultaneously slamming them for their inadequacies is crucial in achieving your end goals of being seen as better than them and, as a result, rising above them. You want to mix the paired skills of coming across as generous and yet not giving any ground to people whom you would rather see below you on the ladder than above.

At the same time, you will be building a foundation of insecurity in your co-workers that will, if done right, last them a lifetime.

The key to this skill is to congratulate your peers on completely unimportant things, while never acknowledging anything that they may either care about or which may be an attribute that is actually important in the workplace. The trip report example above is a good one. What better way to recognize a peer’s efforts than to compliment them on the results of them? And yet what better way to belittle their overall efforts in the corporation than to fail to recognize skills more closely connected with the job they are paid to do?

Let’s take a look at some other examples of effective compliments. Feel free to use these in your workplace or, for the more advanced Corporate Warriors, to learn the pattern and come up with some compliments of your own.