When I am King: Lost and Found

I had the pleasure of staying for a week at a boy scout camp last week. Anyone that knows me will be surprised to learn that I didn’t die, either from ineptitude or unhappiness-inspired suicide. As a matter of fact, I managed to enjoy the experience. Once you get beyond the various elements of camping, such as the food quality, sleeping in the cold, the bats nesting right outside the open window, the lack of strong coffee to defend against fatigue, the paucity of booze, the incessant hiking up and down camp for every errand, and the feeling of being Pigpen, trailing a thick cloud of dust behind you everywhere you go, it turns out to be fun simply hanging out at camp. Maybe it was the books I read, or the camp activities I participated in, or the rambling conversation with the boys and adults in the camp. Or perhaps, just perhaps, it was the complete lack of responsibilities for a week, a first in my life since the week after college finals finished and before the hangover wore off.

It was in this spirit of "camp is fun!" that I mistakenly went for a hike in the woods. It was a mistake not because of the hike itself, or because of the woods, but because of the part where I got lost in the woods. I had a map with me, of course; it would be silly to go hiking in the wilderness without a map. But the map was about as useful to me as a recipe for borscht; once I got past the recognizable sites on the map ("shotgun range", "rifle range", "mountain man"), it ceased to work. I looked for signs which were obvious on the map: trails leading off to the right, forks in the road, bends in the path; none of them appeared. The map must have been drawn by someone that got tired of their job and simply imagined the rest of it. It was like the maps from the Old Country, showing European countries in great and accurate detail, then an expanse of ocean to the west, followed by sea monsters. They didn't quite know what was out there, nor how far that something was, but they were pretty sure it'd eat you. In my case, someone took an educated guess that there'd be a path, and probably some other paths off that, and that maybe it'd circle back to camp eventually. So that's what they drew.

I'm accustomed to tools not working properly and generally know how to fix it, but in this case the map had no reboot switch. Paper is soooo 1800's.

I blissfully followed the trail into the woods for 10 minutes. Then 20 minutes, seeing no other turns. Then 30 minutes, with the trail leading me farther and farther from camp and everything I'd ever known. I began to have a feeling that I might do better by turning around. Finally, at 40 minutes that decision was made for me as the trail simply ended in some random brush at the top of a rise. I turned around and made my way back.

At this point, I realized that it was going to get dark soon, and while the trail led me faithfully away from civilization, I had no idea whether it would conveniently lead me in reverse back to civilization. I thought it more likely that I was caught in a trap, like the crab traps I used in Chesapeake Bay when I was a kid - the crabs found the entrance much easier to use than the exit. I could almost smell the cocktail sauce.

I took stock of my possessions. I was on a trip with the scouts, so of course I knew about the Ten Essentials. These are the items that no boy scout should be without (even, apparently, when going through security at an airport, which explains why TSA detained us due to the three pocketknives in my son's backpack). As I didn't have a backpack on me, my stock-taking was pretty quick: 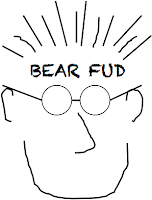 It turns out that the only essential item I had was the broken map. Unless I could make something useful out of shoelaces and a belt buckle, it looked like I was doomed. I might as well have written "Bear food" on my forehead and gotten it over with (though I also lacked a pen with which to write).


Having generated an appropriate amount of anxiety, I took the appropriate action: I ran back the way I had come.

Fortunately, to make a long story only slightly longer, the trail, in a surprisingly un-crab-trap-like manner, did work in reverse, and I ended up where I started from. I passed "Shotgun range", "Archery", and several campsites on my way to the dining hall, where everyone was happily digging into dinner, having noticed my absence not at all. It was a relief to know that I could have been lost, mauled, eaten, and digested long before it came to anyone's attention.

I spent the rest of the time at camp studiously not hiking. I did many activities for the rest of the week, but hiking was not among them. And getting lost was similarly not on the list.

It is in the spirit of this hike, and of camp in general, that I offer my list of essential items. These are the things that I will take on any future camping trips, and I suggest that if you want to enjoy the experience, you do the same.

To make this list even more useful, I'll add an eleventh item, probably the most important one:
With these essentials, I feel confident that people forced to spend time in nature will be able to get through the experience more comfortable, happy, and alive than they would otherwise. Another option to consider is simply staying home. There's a reason that we all came down from the trees, and it wasn't so that we could sleep on the roots.
Posted by Chet Haase at 7/27/2012 No comments: 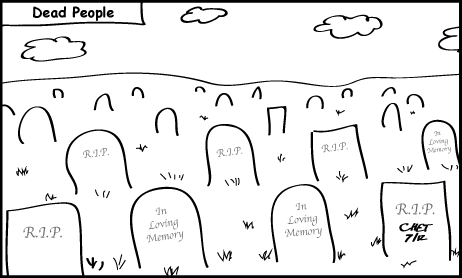 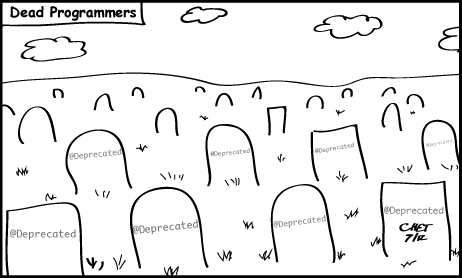 He who lives by the sword shouldn't roll over in his sleep.

He who laughs last is pissing me off.

He who pays the piper should have him stop playing. That instrument is annoying.

Ever wonder what they do in all of those administration offices in school? 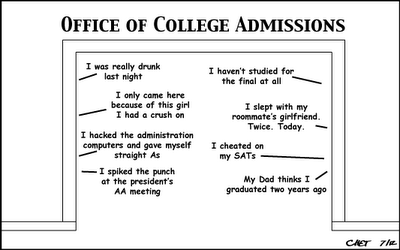 No Shirt, No Shoes, No Service 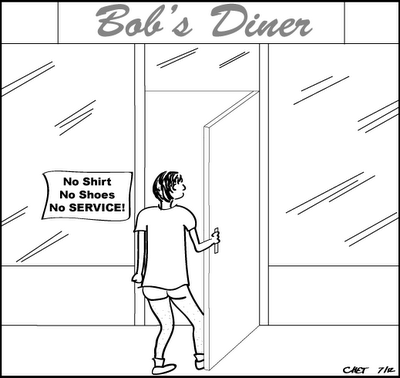 What It Was, Was Andy Griffith

"I think that it's some kindly of a contest where they see which bunchful of them men can take that punkin' an' run from one end of that cow pasture to the other, without either gettin' knocked down ... or steppin' in somethin'"

I don't normally comment on celebrities passing away, because they probably have enough to worry about without us bothering them about it. But hearing about Andy Griffith made me pause this morning, and I wanted to say a few words on the subject.

My connections with Mr. Griffith are few, and mostly those that others of my age and temperament share: seeing him on reruns of The Andy Griffith Show throughout the years of my childhood and then occasionally on other TV shows such as Matlock. I liked him, but no more or less than other good comic actors.

But what really endears him to me is an odder and more personal connection of which that he remained blissfully unaware: Andy Griffith was my speech coach.

Long ago, when I was in the sixth grade, we had a project to each memorize a speech to recite in front of the class. It was something right out of The Little Rascals, minus the overalls and the cheesy dialog.

The problem was, I didn't really know what kind of speech to memorize. I didn't exactly spend my spare time going to see great orators, and other than memorizing The Gettysburg Address, I didn't really have anything in mind that I should attempt. And recall for a moment, oh you spoiled generation of Internet-weaned children, there was no magical database to search for speeches at the time. I could go to the library to try to figure it out. Or I could paw through our set of World Book encyclopedias. But neither of these seemed very fun or easy, and neither seemed likely to result in a speech that would be something I'd want to spend my time memorizing, or that my classmates would want to spend their time listening to.

But we did have a record player... 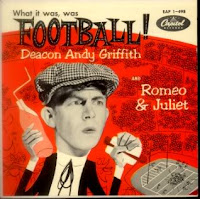 It was at this time that I found an old 45 record of my father's, with a beaten-up cover in black, red, and white 1950s graphics, of Andy Griffith reciting a story, What It Was, Was Football. I suppose I'd listened to it once (recall again that I didn't have the Internet to waste my time and media attention on. It was either listen to the record player or go out into the dirt street and play that hoop-and-stick game. Oh, those were the days). And, for reasons that escape me but probably seemed sensible to a sixth grader, I decided that this was the speech for me.

I'm now known to give occasional technical presentations and even more occasional standup performances. All of these might just be traceable to this start as an Andy Griffith mouthpiece, fake country accent and all.

The speech was recorded, though (thankfully) can't possibly exist anywhere anymore. I can't imagine how awful it was. It did, I recall, win some prize and classroom applause, but I attribute this more to the fact that the other students actually knew what the teachers meant by 'speech' and probably managed to memorize something more appropriate, and appropriately dull. Nobody else, to my knowledge, gave a comedy oration. Nor did they, as I did, close their eyes during the latter half of their talk. I found it to be easier to remember the words when I wasn't looking at the camera and everyone in the classroom. Fortunately, I've left that habit behind me. Even more fortunately, the recording of the event has perished over the generations of video recording equipment.

In any case, I wanted to write some homage to Andy Griffith when I heard about his death this morning. But instead I've written what you see here. In memory of him, and especially his memorable story, I offer this recording of his 'speech'. This time, it's given by the most qualified person to give it: Andy Griffith himself.

What It Was, Was Andy Griffith.