I've always made my own Christmas cards, partly because I prefer my own jokes over store-bought ones. But mostly because I'm a cheap bastard. 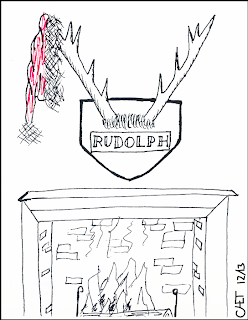 In this first installment of a series of Great Poets reading some of their classic works, we see Dylan Thomas reading his holiday classic, A Child's Christmas in Wales.

'Twas the Night Before Donut

'Twas the night before Christmas, when all through the house
Not a donut was stirring, nor a crumb on a blouse.
The donuts were stacked by the chimney with care,
In hopes that St Nicholas would see them all there.

The children were nestled all snug in their beds,
While visions of donuts danced in their heads.
And mamma in her ‘kerchief, and I with my donut,
Had just settled our brains for a big winter’s donut.

When out on the lawn there arose such a clatter,
I instantly ate a big donut from the platter.
Away to the window I flew like a flash,
Then back to the donuts (no need to be rash).

With a donut old donut, so donut and quick.
I donut in donut, it donut St. Nick.
More donut than donuts his donuts they came
And he donut and donut, and donut by donut.

The Reason for the Season

People often talk about the “reason for the season” at this time of year. It's so easy to lose sight of what it's all about, what with all of the shopping, and the fuss, and the arguments leading to restraining orders, breakups, and [totally unwarranted] manslaughter charges. So I thought a small history lesson would provide some important context.

Did you know that Santa Claus was based on a real person? Did you also know that this person was named “Jacob Torvoldtsen”? The change to Santa Claus makes more sense when pronouncing Jacob’s name in the original Finnish language; that language is actually just a simple code where letters represent completely different letters in other languages. This approach to their language also explains why people with Finnish accents often sound like Stephen Hawking’s voice, because their brain is too busy processing the code algorithm to spend much time on subtle human nuances of pronunciation.

Mr. Torvoldtsen (hereafter referred to as Jacob, because I have the darnedest time spelling his last name) was famous in his community as someone who gave stuff away. Specifically, he was the local drug pusher, standing out on the corner of Blakemont and Fünfnoggle at all hours, selling temporary happiness to junkies of all ages. He was well known for giving the first one away for free, knowing that his highly addictive products would have customers come back clamoring for more at any price. He sold mainly two products, which he called “Merry” and “Happy,” in a desperate attempt to use marketing spin to cover the fact that they were both basically nothing but fermented reindeer dung. Even in the dead of winter, Jacob would be seen standing there, in drifts of snow 15 feet deep. Actually, only the snow was seen, but passers-by could hear him deep inside the snow peddling his wares, with a muffled “Have a merry! And a happy!”

The drug business wasn’t easy in those days, especially since he depended heavily on foot traffic in an area where it was too cold for people to leave their houses ten months out of the year. So, keen businessman that he was, Jacob entered the flesh trade, becoming a pimp for the local street walkers, whom he referred to as his “pack of elves.” Soon it was common for the community to hear his hawking cries at all hours of the night, crying “Ho! Ho! Ho!” as he tried vainly to interest sailors, businessmen, and young school boys in women so deeply embedded in parkas that potential clients had no idea what they looked like or whether they were actually women. Jacob tried, of course, to have his employees dress in slightly less clothing, but this ended up costing him as those women usually died of frostbite or ended up in the hospital.

It was really only when he took his tawdry business on the road that things picked up for Jacob. One night, more to elude the local constabulary than for any other reason, he sleigh-jacked a young lumberjack on his way back from the forest, tossing the man into a local snow drift and racing off with his vehicle and the pack of reindeer pulling it.

From that point on, Jacob’s fortunes were looking up. He was able to dash quickly into new towns, push his drugs and elves onto unsuspecting people, and race out of town before the police caught up to him. His reputation grew and it wasn’t long before townspeople, knowing that he was on the move, would exclaim, “You’d better watch out! Santa Claus is coming to town!” Unfortunate children who were insufficiently hidden in nearby snow drifts would catch his attention, and he’d ask, “And what would you like for Christmas?,” often throwing them some drug-laced, highly addictive candy canes (which were actually meant to be straight sticks of candy, but which melted into a cane shape, due to the ferocity of the drugs).

Over the years, his wild rides ceased and his adventures faded into legend, attracting, as most legends do, an air of nostalgia and level of falsehood usually reserved for politicians. What were once warnings to the townspeople became friendly greetings, and the man who once was regarded as the “Scourge of Jyväskylä” became the basis for the story of the jolliest man to ever invite small children onto his lap.

So if you happen to see any Santas about this weekend, greet them in the traditional way: say “Hello, Mr. Torvoldtsen!” and then call the cops on them.
Posted by Chet Haase at 12/20/2013 No comments:

My satire talk from the Devoxx conference is now available on parleys.com. It was meant to be a "quickie", although blowing through my 15 minutes' worth of slides in 4 minutes wasn't quite was I expected. Nevertheless, the Q&A session was fun. And totally educational. Totally.

My heart was filled with joy this morn
Because it's donut day.
But biting into my first choice
Didst fill me with dismay.

My solid donut was not filled
With custard or with cream
Or lemon curd or jelly; it's
A nightmare, not a dream.

When I get a donut with no
Hole upon its middle,
But having only dough inside it
Causes quite a riddle.

The pastry contract clearly states
That donuts must have holes,
Or filling otherwise or they're
Not donuts, but just rolls.

Like coffee with no caffeine or
A goal without a goalie,
A donut with no center and
No filling's just unholy. 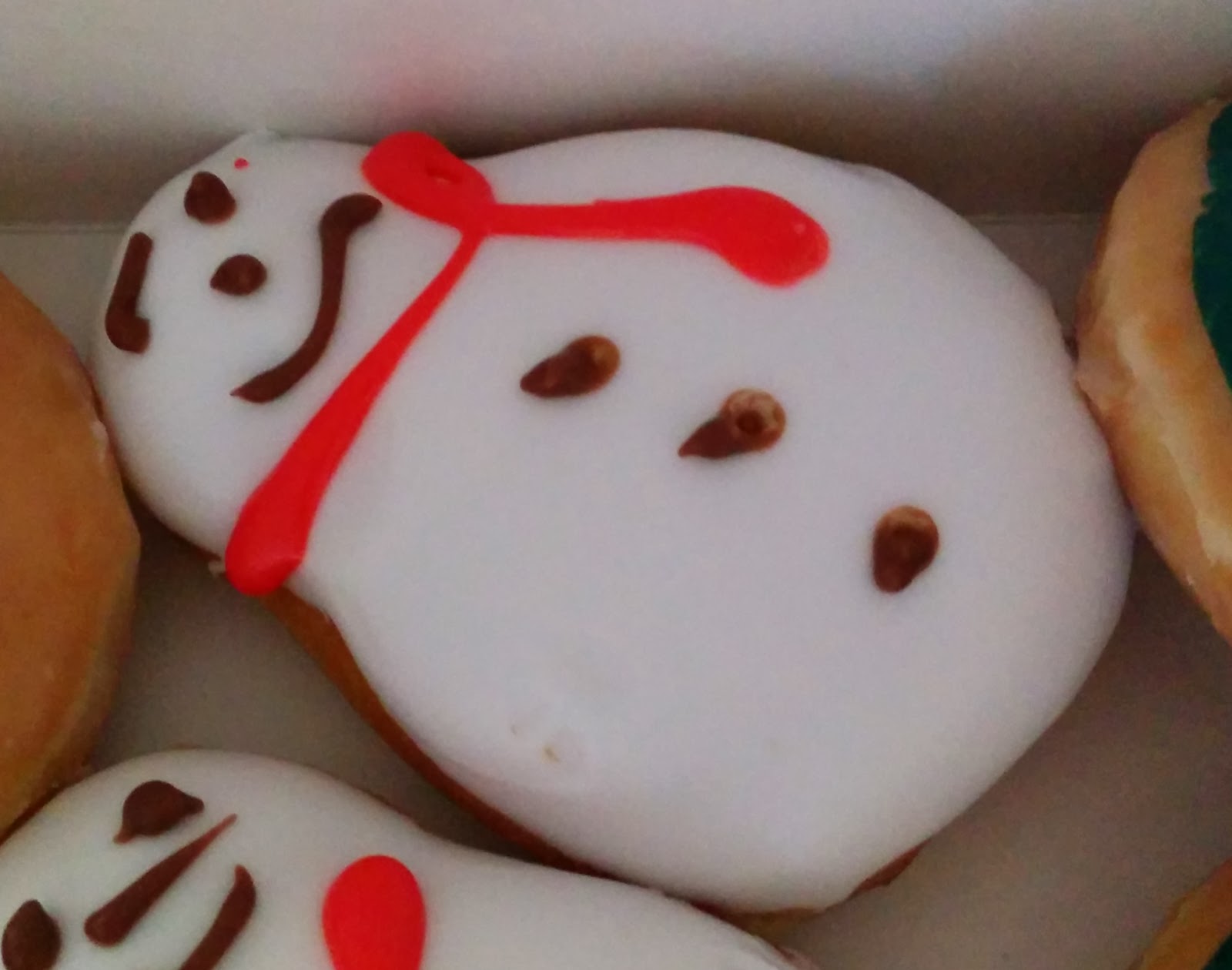 The Day the Donuts Broke

My Krispy Kreme was cold today;
It wasn't fresh and hot.
They sometimes come right off the line,
But these, today, did not.

I don't know why it happened thus;
Or if it was a joke
Upon this day of infamy:
The Day The Donuts Broke.

I tried one donut, then another,
Then a couple more.
None of them were warm and wet.
It made me sad and sore.

But then I found it didn't matter:
Despite the freshness date.
Boiled in fat and covered with sugar,
Each donut's worth the weight.
Posted by Chet Haase at 12/06/2013 No comments:

I got some great deals on Black Friday!
It wasn’t easy, I have to say;
I had to beat others out of my way,
But the stuff I got was just groovy.

I got gadgets and games and DVDs,
And Walmart had great sales on massive TVs
I got one so big I could hardly squeeze
The thing into my big SUV.

My wife took a hit early on, in the mall,
But that trooper cried out, as she started to fall,
“Don’t worry about me! Go on - buy it all!”
And then she was lost in the mob.

My toddler was next on the injury list
As she fell due to somebody’s angry fist
(They were swinging at me, but I ducked and they missed);
She went down and started to sob.

I bent down and helped her (Hey! I’m her Dad!).
Her head wound fortunately wasn’t that bad
And the bleeding was slowing to just a small tad,
So I strapped her back in her stroller.

That’s when things began to go wrong;
I lost those two minutes; the sale items were gone!
Each second delayed is a second too long
In this high-stakes sales coaster roller.

My teen was next to go down for the count;
She was fighting for mittens (with half-off discount!)
And winning (by some eyewitness account),
Until she was shoved off the shelf.

The stories conflict at this point of the tale,
Did she actually bite someone at that sale?
That’s what the cops thought as they took her to jail.
(Luckily, I got the mittens myself.)

The rest of the day was a smooth operation,
There was only one other slight altercation
(Some old lady making a wild accusation
As I pushed her out of my way).

Then I drove the stuff home and packed it all in
The boxes and bags come right up to my chin!
All in all, it felt like a pretty big win.
Now I can’t wait for Cyber Monday!
Posted by Chet Haase at 12/01/2013 No comments: