According to a consumer survey* taken early this morning, zero people in the U.S. shopped in retail stores last Friday, making it the weakest Black Friday showing since hoop-and-stick games were the only toys being sold. Said one would-be shopper, "The mall? On Friday after Thanksgiving? Are you nuts? No, I'll just hang at home. I've got some stuff to do, anyway. Mail to go through, stuff like that."

There was an uptick on Saturday as 311,591,197 people drove to the drug store and bought deodorant, then bought shoes in a local sporting goods store. As one consumer put it, "My shoes were really beat up. The soles were flapping. I sounded like a cheap clown act walking down the hallway."

Sunday saw a rash of online purchasing, as 311,591,197 people bought a book through online retailer Amazon.com. "It was an eBook," said one respondent. "Some sci-fi thing. I dunno, looked interesting."

Cyber Monday also saw a surge of online activity as 311,591,197 people browsed shopping sites, although a total of zero (0) items were purchased. As one person put it, "I looked around on some sites, but didn't see anything interesting. Same old stuff, you know? Besides, I had work to do."

If this weekend is any indication of future holiday behavior, it could be a rough season for retailers, both online and brick-and-mortar. Meanwhile, retailers are expected to stock up in deodorant, shoes, and eBooks, in the hope that these recent consumer trends continue to provide a bright spot in these dark days.

Following is a graphical representation of the survey data. Note, in particular, the huge uptick in shoes because, according to the survey data, people who buy one shoe usually buy another shoe as well. 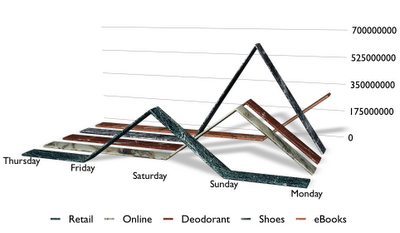 * Survey sample size of one, extrapolated to current population of United States.
Posted by Chet Haase at 11/28/2012