When I am King: Shampoop

Hair conditioning will become much cooler. 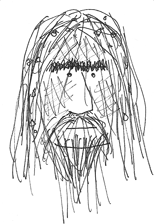 In the beginning, Man didn't wash himself at all. Why bother, when everyone else around us was just as filthy? The cavemen needed their own stench cloud as a barrier of odor protection against that of their stinky peers.

Then something happened, probably a job interview. Or a date. And someone cleaned up a tad, raising the bar for everyone.

Early man started cleaning himself with anything readily available, which at the time meant animal carcasses. However, the animal-meat-scrubbers were soon evolved out of our society, since they tended to be easily detectable by local predators and became food instead of clean.

So man resorted to other, less disgusting materials, such as gravel, dirt, and toenail clippings. Although these materials worked arguably better than animal carcass, they still left much to be desired, and tended to be more of a mechanism for moving the filth around than actually removing it.

Then came the great discovery of Water (unfortunately discovered just after Fire, thereby failing to prevent The Great Cave Burning of 90095 BC, generally considered to be the first Burning Man celebration, if not the first one where the figure burned was artificial). Water gained immediate acceptance as the preferred method of cleansing, except for dating, where the couple would still use the traditional approach of rubbing themselves with dirt, thus giving rise to the notion that fooling around on a date was “getting dirty.”

Next, several thousand years and many generations of death-by-reek later, man discovered soap. Now, not only could man remove the dirt on his body, but he could also then add another slimy substance to his body afterwards and then remove that, too. This habit was originally adopted to simply give Woman an excuse to spend longer in the shower.

Finally, Man discovered shampoo. Or, rather, Marketing discovered it. Soap was doing a fine job, but why sell only one product when you can sell two? People became convinced that there was something special about soap in liquid form that they weren't getting from the solid soap. Besides, they didn't drop the shampoo on the floor quite as often.

The concept of shampoo is simple: You rinse, you put in the goop, you scrub your hair, you rinse it out. The “Repeat” step in the instructions "Lather. Rinse. Repeat" label remains a mystery, although repetition is probably a good idea for those who had previously washed with dirt, perhaps in preparation for a heavy date.

But then along came “conditioner,” a substance to be used after shampoo. According to the label, a conditioner “replaces the body's essential oils.”

When I am King, I will provide a new kind of shampoo, called “Rinse”. This shampoo will be, essentially, water. But it will be a whole lot more expensive, maybe more like bottled water. The instructions on the label will be simple: “Rinse. Rinse. Repeat.”. The label will also say, “Leaves the body's essential oils The Hell Alone.”

I will also release a line of non-liquid hair cleaners, called “Dirt.” These products will be marketed at a higher price for special dating occasions. Slogans, such as “Get Dirty!,” “Gimme the Dirt!,” and “PayDirt!,” are being test-marketed with consumer focus groups now, and there is an infomercial series in the works, under the name “Talk Dirty to Me.”
Posted by Chet Haase at 7/19/2007

Shampoo is different from soap in various important ways but mainly in the differing PH levels in your skin and your hair and in the associated products used to clean them.

It is not a marketing gimmick.

They are not interchangeable.

Usually the hair suffers the most when washed with skin soap. After repeated washings, this difference becomes pronounced and the hair very brittle.

Although I have a chemistry degree from UC Berkeley, I'm certainly not an expert on conditioners, but as a long time and current competitive swimmer,with two-a-day workouts and with no male pattern baldness, I can attest to the need for conditioners, and even "finishing rinses" as well , when available.

Without these, my hair would be a proverbial "rat's nest" all the time.

I'm sure the women, with longer hair have the same problem, only much worse.

Just my 2 cents worth.