"Oh, to see the cranes of Antwerp on last time ere I die," as the famous poet said.

It's hard to choose a single feature of this city from the many beautiful and prominent ones that it offers, but if there's one thing that stands above the rest, it has to be the cranes.

Decades ago, the cranes stood a functional purpose, helping to erect the beautiful buildings that established Antwerp as one of the architectural marvels of the world. The cranes helped the city accomplish this very quickly, allowing them to take advantage of the beauty that 1960s architectural standards enabled, which is why there are so many of these concrete icons occupying every square foot in the city. 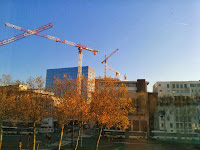 But in creating the skyline of these adored gray hulks, the city planners realized that they had something even more marvelous on their hands: the cranes. Slowly, they began adding cranes to every crack in the skyline, filling in the gaps left by insufficient amounts of concrete with these towers of rusting, swinging metal.

These cranes no longer do anything, as there is no space left unoccupied by the dark gray concrete blocks, but they stand on their own, as art pieces of engineering and architectural beauty. They serve as a reminder of both how the city was built and what is possible in human endeavor.﻿ 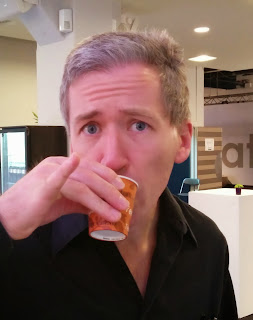 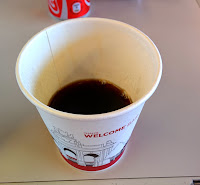 One thing that has always impressed me about Europeans is their health-consciousness. Whereas other cultures might think, "Give me as much of that thing as I want," the European attitude is "Give me just a tiny bit because it might not be good for me." 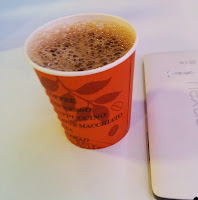 In these pictures, we can see this approach in the serving size of coffee. Whether it came in a cup the size of a thimble or whether they used a reasonable size cup but poured in just enough to cover the bottom of it, they were always thinking of me and my health needs. Sure, I wanted enough coffee to actually form a complete mouthful. But did I really need it? Probably not. Besides, I could always go back and get more, which is what I did, sixteen times.﻿ 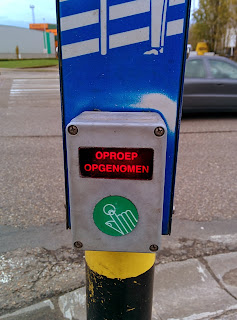 Although I traveled to Antwerp for a software development conference, it was not apparent to me until I saw this sign how intrinsic software technology is to this great city.

You can see here on what I mistook as a simple "Walk" signal that the implementors didn't just stop at a simple button/sign approach. Instead, they invented a whole low-level language to express the intention and functionality desired, as seen by the two op operands.

roep is Dutch for "call", so obviously the first statement establishes a call to a function. The second operation, genomen, is clearly a more general-purpose function about human genome processing. Apparently, simply turning on the 'Walk' signal is just a side effect of this far more involved algorithm. I suspect that the button was extracting DNA data from fingers that pressed it and then sending it through the genomen function to do some data tracking and analysis, possibly to serve up targeted ads in the ensuing Walk/Run signage. Opviously.﻿ 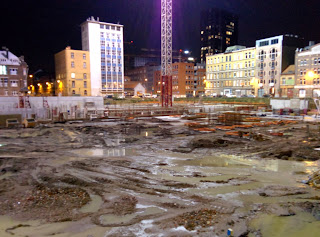 I've written elsewhere about the plentiful and beautiful waterways that wind their way lazily through this city. Here's a shot that I took at night that shows some of the channels working their romantic charm. In the distance, you can make out one of the prevalent cranes, adding its own romantic nuance to the scene.﻿