When I am King: Bringing Up Upbringing

There will be no more parenting.

Today, I wanted to talk about the most important job of adults. No, not emailing YouTube links at work. I'm talking, of course, about parenting.

In our real jobs, the ones we get paid to do, we provide products or services or additional layers of unhelpful bureaucracy to our clients. But in parenting, we are imparting the rules of life itself not only to our children, but, indirectly, to everyone that they will interact with and every generation that they parent. So, in effect, as a parent you have a significant impact on the entire future of our planet.

At the same time, parenting is the job that we are the most unqualified to do.

For the job that pays the bills and provides the stress and adrenaline that keeps us going until retirement, when we'll simply expire from exhaustion and relief, we spend years getting ready and our entire working life perfecting the necessary skills. First there are the 12-ish years of primary education where we learn such important skills as hiding from bullies and sucking up to the teacher. Following that, we optionally head off to college, where we learn to drink heavily without dying. And we may even continue on in graduate studies, focusing in on particular areas of study, such as learning how to live below the poverty level for indefinite periods of time.

After this decade or two of education, we're finally ready to enter the job market. But we don't start out delivering finished products to users. Instead we train and act as part of a team, honing our skills over the years before we actually take on any semblance of responsibility or ownership in our field. So it can be many years more before we are trusted in our capabilities enough to unleash our output onto our users.

And in some fields, such as software, there is a high tolerance for failure. After all, if the 1.0 version is awful, there is always 2.0 next year, or 3.0 the year after that. Upgrades are a way of life.

But the job of parenting is given to us for the simple reason that we happen to be the oldest person in the group. That's like having the pilot of the airplane be the person seated closest to the cockpit. Or the designated driver be the one that's the least passed-out on the floor of the bar. Or the elected official be the one with the most money. No, scratch that last one; that is the way politics works.

I think the theory is that we're trained to be parents because we grew up. That's like saying that I'm a good fighter because I've been beaten up.

In parenting, the very tools that train you are themselves the products of your ineptness. You're not just screwing up a prototype; it's the product itself that suffers. That child holds every nuance of your failures in their very being, learning from your mistakes to grow up and make them all over again with their children, passing along the mistakes of their ancestors for generations to come.

If you have more than one child, you could think of the first one as the flawed first version, and the second child as a better 2.0 product, except that you aren't allowed to pull the 1.0 version off of the shelves. The second one isn't an upgrade from the first; they're both out in the market for life. Besides, are you really that confident of what you've learned with the first child that you think you'll nail it better with the second one? All you've learned is how you can make some things easier for yourself the second time around, like how long you can let that diaper go without causing too much of a rash or public health hazard. It's not clear that any of the mistakes you made the first time have taught you how to not make them next time around. In fact, you probably won't really understand the mistakes until the project is finished and you see the resulting adult that you helped create.

And we wonder why teenagers lack respect for their parents? That's just the age at which they realize the awful truth.

When I am King, we'll leave parenting up to the experts: nobody. There will be no more children, no more parenting, and, eventually, no more human race. Sure, it's an extreme solution, but think of the larger benefits: more free time and money to try fill that hollow emptiness in our lives, and the eventual recovery of the planet from our incessant existence.
Posted by Chet Haase at 11/11/2010 No comments:

Email ThisBlogThis!Share to TwitterShare to FacebookShare to Pinterest
Labels: humor, parenting, When I am King 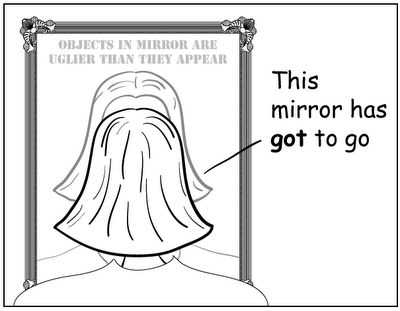 In honor of, or despite, election day here in the US:

It's no coincidence that Halloween is so close to election day. They're almost the same:
On the whole, I find Halloween much easier to take. At least we only have to live with the mistakes of that night for the next day, until our digestion recovers. But election results are with us for years.
Posted by Chet Haase at 11/02/2010 No comments: