People have mentioned that I bear some resemblance to CNN's Anderson Cooper. I personally don't see it. Other than the fact that we both hang out in sport coats, live life on the edge, and are world-famous television personalities, I can't see the similarities. I had CNN send me a headshot of Mr. Cooper so that I could compare it to one that I had lying around (note: Mr. Cooper is on the left):


Besides the fact that he highlights his hair with gray to get that distinguished look I've been perfecting over the last several years (although he seems to have overdone it a bit), he clearly doesn't have the same intrepid reporter feel that I inherently exude. But he tries.
Nevertheless, it seemed worth pursuing the following possibility, since the public might see the pair of us differently:
I am hereby applying for the role of Anderson Cooper's Stunt Double. Celebrities have used stunt doubles ever since the demise of Isadora Duncan (which also resulted in a general trend away from long scarves and convertibles, whose popularity had previously run neck-and-neck). It is now quite common for famous people to use doubles for everything from movie stunts to charity appearances to tedious relationship conversations. The use of doubles has freed up these important people for more critical things in their lives, like sleeping in.

With Mr. Cooper's propensity to put himself in dangerous situations, from the protests of the Middle East to the stampeding cows of Wisconsin, it is clear that he would prefer not to give up the riskier side of his job. But he would surely like to be able to be in more places at one time, enabling him to be both in the newsroom and in the field. So I am applying to be his inverse stunt double. He can continue to do the stunt work required of his job, and I'll take on the awesome responsibility of all of the other stuff that he could do. Sitting in the newsroom, being interviewed for the Jon Stewart show, eating expensive meals at fancy restaurants: these are all of the things that he would surely like do more of, if only he wasn't so busy risking his life to report the news. With my help, he can do it all.

Why stop at Anderson Cooper 360, when he could have Anderson Cooper 720 instead? There's a revolution one could believe in.
I'm currently waiting to hear back from Mr. Cooper's people. This process would probably happen a lot faster if his people included an inverse stunt double to handle this kind of administrative detail for him. Meanwhile, I'm practicing the moves requisite for the position: smiling, shaking hands, eating expensive food, and adding more gray to my hair.
Posted by Chet Haase at 2/27/2011 4 comments:

A person is known by the company he keeps. Especially the CEO.

A picture paints a thousand words. But they're really tiny and hard to read.

A rising tide lifts all boats. Then it smashes them on the rocks.

When I am King: Phoney Business

Phones will be phones. Internets will be Internets.

A few months ago, after incessant marketing spam from AT&T, I ‘upgraded’ to UVerse. I had been a happy DSL customer for years. Without cable TV, or the desire to get it, didn’t see the reason to change my ISP service. I had a phone. I had the Internet. I was set.

And they never called back. Obviously, a customer without TV coverage is not worth having. Maybe they detected my inherent inability to pick up on social trends, or my failure to see all of their UVerse ads on TV. Or maybe they figured a lack of cable implied a lack of income and I’d soon be living on the outside of my foreclosed house, anyway.

But I am, above all, a cheapwad. So when I finally saw an ad that convinced me I’d pay less for my phone+Internet through UVerse, I went for it. I had to wade through all of the online pages that tried to get me to buy TV coverage first, of course. It was like going to a department store for a pair of sneakers and having to wind through the aisles of jewelry and makeup and bedding along the way. “You don’t want th TV+Internet+phone package? Well, how the Internet+phone+TV package instead?”

Finally, I managed to get the service I want: UVerse for cheapwads. Phone + Internet. Period.

And it was cheaper, at least for now. And it basically works.

But today, I called home in the middle of the day. And I got the response, “The subscriber you are trying to reach is not currently in service.” Called again, same response. Which nearly rules out my wife having an affair, unless the guy is really good at sounding exactly the same every time he answers the phone.

Subscriber? You mean my house? I didn’t realize the house had subscribed to anything. I just thought it was a house. With a phone.

Then the reality of UVerse hit me: I now have a VOIP phone. That is, a phone on the network, instead of on a phone line.

This makes sense in general: phone traffic over the Internet. It enables all kinds of services that appeal to cheapwads like me. But somehow I find this particular use of it a tad ridiculous:
UVerse comes to my house through the phone line. It's basically DSL with branding. So I traded out my phone service so that they could put my phone on the Internet service that they provide through my phone line. And now my phone doesn’t work. The phone line still works fine. And if I still had regular phone service, the phone would be ringing. But since it’s connected through their hardware and software along the way, it’s masquerading as an out-of-area cell phone instead.

It really makes me want to try out their TV service for an extra $50/month.

When I am King, phone lines will be used to make phone calls. Phone lines can also be used for other purposes, like carrying network traffic and restraining children at the dinner table until their broccoli is finished. But if there’s a phone, by gum it’ll be plugged into the dang phone line.

Happy Valentines Day.
To show you how much I care, I bought you a card for $4 written by a stranger, plus some candies that taste like chalk.
And some dead flowers.

When I am King: Gameskill

Video games will train our children.

As a new owner of a fancy phone, I’ve been doing a lot of research into phone applications (I’ve been playing a lot of games). One of the games I’ve been losing my life to is Angry Birds, a game in which you launch birds at pigs.

It struck me, when I first started playing the game, that game designers have simply given up on the whole “plot” thing. I could imagine the meeting when the company tried to define the vision of the game: “There are these pigs, right, and they take these, um, eggs. And, let’s see, the eggs must have come from some birds, right, and they birds would be pretty angry, and … Ah, screw it. Let's write some code.”

But as I’ve sunk more of my nonexistent spare time into the game, I realized that there is actually a deeper level on which the game operates. It’s not about plots, and stories, and characters, and all of the traditional elements of an engaging fantasy world. Instead, it’s about life skills.

Think about it: you learn to precisely target the birds at the enemy to destroy them and their defenses. You sow terror in the pig community in the hopes of getting the eggs back. You wreak havoc and revenge upon every pig you see, advancing levels only when you have killed every pig in sight. And you do all of this with minions that are happy to die for the cause. 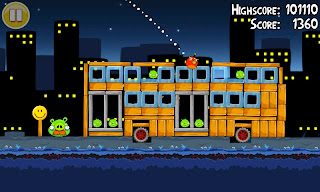 Angry Birds is training the next generation of suicide bombers.

This might be too subtle to catch at first. Then you get to the level where you launch the bomb bird at the bus full of pig children.

And while this could be construed as disturbing on some level, the fact is that our children need to develop life and career skills. Gone are the days when responsible parents would send their children out to harvest the crops, milk the livestock, and slaughter the family pets. And children learning a manufacturing trade in sweatshops is a dying tradition. Even the coal industry, a natural for minors, is sealed to the little tykes. So where are kids supposed to pick up the crucial experience that can carry them into their brief adulthood and us into our retirement?

Meanwhile, most kids spend every possible waking hour playing video games. What better way to train tomorrow’s adults than by teaching them through this engaging and interactive medium?

When I am King, all video games will teach important life skills. We’re part of the way there today, with such educational opportunities as performing hits for the mob, massacring aliens with heavy firepower, and jumping over crates to collect coins. But we could go so much further with a little more focus on the critical elements that our society revolves around:
The time that kids spend playing will make them more qualified for these and other critical roles in our society. When our children can learn a trade in their leisure time, it's time to cut funding for education, because that's what governments do.
Posted by Chet Haase at 2/07/2011 No comments: