Seemed like an appropriate sentiment for the season. That is, the political season. And hunting season. 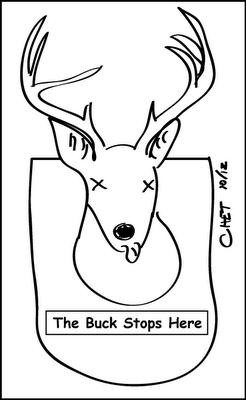 
Another day, another dollar. I really need a raise.


Do not curse the darkness. Light a candle and curse the hot wax. 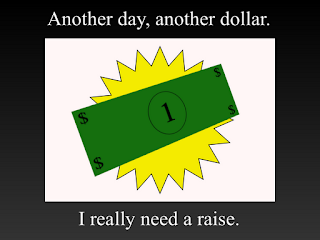 When I am King: Fightin' Words

Candidates will just fight it out.

Presidential debates are an odd and obsolete phenomenon of our culture. Theoretically, we expect candidates to get up on stage and battle each other with their wits, knowledge, and ability to post a zinger, so that we can decide who has a better plan, and who would make a better leader, and who has a nicer suit.

But in reality, it’s just cheap voyeurism. The two remaining undecided voters in the country may want to tune in to see if they learn something new, but if they haven’t made up their mind by now, what are the chances that a debate is really going to help sort it out for them? That’s like drinking a second case of beer just to see if it also makes you throw up.

No, the real reason we do this is to see a fight. This is a culture that thrives on watching damage. We are a people that puts ourselves and our loved ones in danger by slowing down in the fast lane just to get a better glimpse of a bloody accident on the other side of the highway. We watch car races just to see the carnage (I honestly can’t imagine any other reason to watch people drive in circles for hours and hours). We watch daytime talk shows just to see if the jilted lover’s going to throw a chair at her brother-husband. We have an entire professional class whose job it is to fight for us in the courtroom while we sit on the sidelines and watch them duke it out with the other side’s highly-paid pinch-hitter.

Our culture was founded on fighting. In the beginning, Eve made Adam eat more fiber, bringing down the wrath of God upon them (Fight! Fight! Fight!) and causing the Original Argument which must have lasted through their entire, bickering marriage. Countries were formed by wars, kingdoms by murder, and governments by the side with the scariest army.

But we’ve evolved since those early days; now we have television and the internet that allows us to simply watch fights instead of having to participate in them. We’ve matured from a childish society that fights into a refined society that watches fights. Because, when it comes down to it, fighting is tiring, messy, and painful; it turns out to be much more enjoyable to watch others pound each other stupid while we have more beer and popcorn.

In political debates (a subject which I’m struggling to get back to, having gotten all excited about the topic of fighting), we each have the person we’re rooting for, and we want to see them slug it out and come out on top. We watch the debate through squinting eyes, afraid for the moments when the other person lands choice blows, and then diving onto the news sites before, during, and after to see whether we won the fight.

But this is all so indirect - why have the candidates dress up in suits and use words, prepared statements, and reams of facts and what we really want is blood on the mat?

When I am King, debates will be determined the way politics was intended; with fists, knees, and underhanded tactics. Let’s see some action, some pain, and some physical glory. Sure, winning such a contest has nothing to do with whether the champion would be a good leader for our nation. But since when have politicians ever been qualified for that role?

Besides, when I am King, they won’t be vying for the top spot, as that position will be taken. By me. So bring on the fisticuffs. I’ll sell beer and popcorn.
Posted by Chet Haase at 10/05/2012 No comments: