A friend at work had just moved to this country with the intention of becoming more fluent in our language, so I took it upon myself to help. I figure it’s the least I can to do assist people in learning to speak my language better, because the more people that speak American, the less need I’ll have to learn anything else.

I’m not much for rules of grammar (diagramming sentence structure was the low point of my high school career, which is quite an achievement given the vast number of entries in that contest). But I do like words. In particular, I like words that sound funny, or dated, or quirky, or are particularly well-suited to niche situations. A choice bon mot is worth several gratuitous uses of foreign phrases tossed arbitrarily into unsuspecting sentences.

So I started keeping a list on the whiteboard of our office, appropriately entitled:

At the risk of making some of these words more widely used, and therefore more mundane, I’ll offer them here for inspection, introspection, and conscription. That is, I offer them to you should you find a need for them in your daily speakage. Maybe they serve you well, or at least cause your listeners the same confused looks as those people that make the mistake of listening to me.

Note: Since the complete list of words is fairly long, I will not put it here in its entirety. I will, instead, dribble them out in bits and pieces over time, to draw out the suspense, prolong the anticipation, and simply because it gave me the opportunity to use the word dribble. Also, the list is not complete, because there are so many fantastic and obscure words that are not yet on the list, and because my friend returned to the country whence* he came. I’ll start with just five words each time, to give everyone time to absorb and utilize them, and because that will make the entire list last that much longer. I’ll increase it from five when I get bored. In the meantime, utilize is a great corporate-speak word, when you just need the word “use,” but you want to sound smarter in front of your boss.

Another note: These words are not all unusual, and many may even be common. The important thing is that they sound odd. To me. So if you don’t think they belong on this list, that’s fine. You’re free to make your own list. This one is mine.

One final note: There is no particular order to this list. Or, rather, the list is roughly chronological. That is, these words appear in the order in which I wrote them on the whiteboard, except when the board ran out of room and I squeezed some into small crannies of space in the existing list. Crannies is a good word, too.

meek: Okay, meek is not an uncommon word. Heck, it was even in The Bible, Yea Verily. But it has an excellent combination of long vowel sounds and an excellent “k” sound at the end, which always sound like a mistake, or like Dutch. The word reminds me of my favorite Flemish phrase, seen on many a restaurant in Belgium: Eetkaffe, which I always took to mean “a café in which you can eat.” Which makes a lot of sense, especially if you don’t speak English and you’re stuck in Belgium. I hope all of Flemish works this way so that I can speak like a mildly retarded toddler and get my meaning across anyway.

lascivious: I just love the sound of this word. It sounds like what it is; kinda sexy, kinda bad, with an excellent “s” sound at the end which always sound slightly evil (unless you have a lisp, in which case it’s not a great sound on which to end or begin. So sorry).

oblivious: Just a good, solid word meaning “clueless,” but with twice the syllables. If you need to pump up the intelligence in your sentences, go for increased syllable count; it works every time.

rambling: I like this word because of the imagery. The sound of it is so close to “bumbling” and “stumbling” and has the same meaning in my mind of walking along in a shambling manner, eventually getting somewhere, maybe, but not really caring where or when.

reprieve: This word has a nice official tone to it, one that sounds perfect for court decisions, or even royal ones, as in, “The prisoner was pardoned at the last minute by The Queen herself. Unfortunately, the much sought-after reprieve came through exactly one second after the axe had sheared his head clean off. Still, his widow was thankful, as it erased the besmirching of the family name.” (Besmirch is an excellent word as well).

*Dictionaries informed me that this odd-sounding use of “whence” is actually correct, and the more correct-sounding “from whence” is actually wrong because the “from” is already implied in the word "whence." So maybe I care about grammar a little, but only when caring about it allows me to use awkward-sounding words like whence.
Posted by Chet Haase at 4/28/2013 2 comments:

A rising tide lifts all boats.
So does a tsunami.

A friend in need is a former acquaintance.

A picture paints a thousand words. Words like, "That's not your good side, is it?" and, "Would it kill you to give a nice smile for the camera next time?", and "Does your camera not focus?"
Posted by Chet Haase at 4/26/2013 No comments:

The best things in life are free.
Like jail, after you take stuff that wasn't free after all.

Sunday Comics: Should You Have Children?

Deciding whether and when to have children is a major life decision that most couples go through, sometimes even before the couple is pregnant. Having deep, heartfelt conversations and thinking through the complex issues, the financial implications, and the emotional demands that parenthood demands takes considerable time and usually results in completely the wrong decision.

Experts in parenting have performed numerous, important studies and have developed the following flowchart to help prospective parents reach the right decision easily, allowing them to quickly return to their empty and meaningless lives. 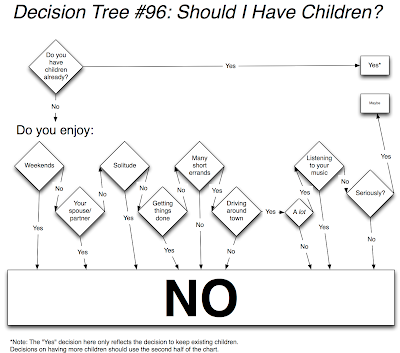 The True Meaning of Easter 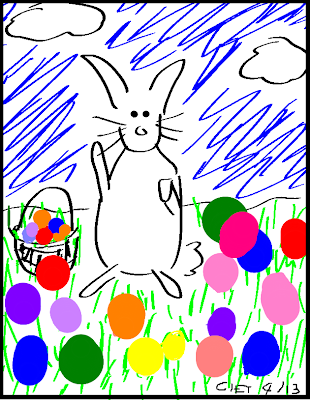