A friend raised a good point in a comment to a Google+ post of mine: Long books weigh more, so electronic versions of those books must do the same. The question is how much.

I think we can assume that 0s add no weight, so all of the weight must be in the 1s. It stands to reason that the more 1s, the more weight, and 1-heavy text would, on the whole, weigh significantly more than text with many 0s.

A quick glance at an ASCII table for character representation is illuminating. For one thing, in a coincidence that I find too extreme to be anything but a first-order conspiracy by the Knights Templar, *all* vowels have odd representations, meaning that they have an extra 1 in the least significant bit. Meanwhile, the space character is even (0 in the least significant bit) and lower-case letters come later in the code than upper-case letters.

There are some simple consequences of these facts that we can derive:
So if you just want a little light reading, pick up a children's book on accounting written in traditional Hebrew.

Data compression is something else to consider. There is obviously a savings on the sheer number of bits involved. But the key is that compression makes data even smaller, and even values, as per my previous calculations, are lighter than odd ones, Q.E.D. I'll leave the details of this proof as an exercise for the reader.
Posted by Chet Haase at 1/29/2012 No comments:

Don't cut off your nose to spite your face. Do it to teach your lips an important lesson.

Don't upset the apple-cart. It can be a real bastard when it's mad.

Genius is one percent inspiration, ninety-nine percent perspiration, which explains why geeks should shower more often.

Benny for your Thoughts

A couple of weeks ago, for no discernible reason, I awoke in the middle of the night thinking about Benny Hill. I grew up watching reruns of the old Benny Hill Show, which was an odd mix of slapstick, titillating jokes, silly music with fast-forward running-around-after-scantily-clad women, and the occasional funny poem.

Most of the material got old as I got older, but I always found the poetry clever, and it was this I thought of when I really should have been sleeping.

So I thought I'd try my hand at it. No, I mean the poetry, not the scantily-clad women bits.

My mother used to teach me things
When I was two or three.
Here are lessons that I learned
As I dandled on her knee.

“My son,” said she, “You should not take
Candy from a stranger.
You should, instead, take cash and keys, for
These are worth the danger.

Neither a borrower nor lender be,”
(she quoted from The Bard)
“For they both have enormous risks.
Stealing’s better by a yard.

Never take more than you can use,
For greedy folk we're not.
But bring me all the rest of it,
'Cause I can use a lot.

Never take advantage of a man,
When he is in a bind.
Until he is not looking;
Then steal the sucker blind.

Time waits for no man,
And neither does a clock.
So steal a man's nice wristwatch,
And put it up for hock.

Don't abuse the sick and old,
For they have troubles enough.
Unless they have a lot of dough,
Then you should take their stuff.

I still recall her last farewell,
As she sipped her final scotch.
She took my hand into her own…
And then she took my watch.

It’s been long years since I lost my Ma
And my Dad did lose his wife.
She’s in the local prison now
Serving ten to life.


Once I'd written it, it seemed like it needed to be performed, along with some musical accompaniment. Here's that result as well.

My son is in the Boy Scouts, in keeping with a long family tradition that started with him (I never made it through the Cub Scouts). There are many things to like about the organization: he’s learning more about camping, outdoors, and adventure than he would in a lifetime of hanging out with me. And the organization is is great, from what I’ve seen, at teaching the boys confidence, leadership skills, and appropriate group behavior, such as cooking for your patrol without killing them.

There are some aspects of the Boy Scouts that I’m not as wild about, but on the whole it’s a good experience for him.

There’s one dynamic with the group that is a bit odd when you first run into it; they are totally paranoid about what could happen between unsupervised boys and adults. They have all kinds of rules and guidelines to make sure none of this stuff happens, and parents have to take training courses before they’re allowed to participate in any of the troop’s activities.

It seems a bit much at first. After all, it’s just a bunch of parents with their kids. But it's probably a good thing as a general rule, and makes the troops a safer environment overall. And who knows, maybe other organizations could benefit from a few more guidelines and online training courses. 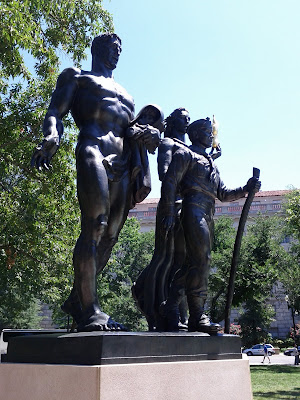 It was this background of paranoia and mandated homophobia that was on my mind when we had the pleasure of seeing the Boy Scout Memorial in Washington, D.C. this past summer. Okay, we didn’t go to D.C. to see the memorial. In fact, we’d never heard of it and wouldn’t have really cared if we did; we were there to take in the museums and to see our government inaction. It’s just that we were walking from point A to point B and it happened to be along the way.

But I was glad we saw it. It’s a fascinating sculpture, with bold classical elements representing the hope and spirit of a Boy Scout and the wisdom and ideals of -

Yes, that’s right, the organization known for its paranoid attitude toward predatory behavior erected a sculpture that shows a happy and blissfully unaware scout being pursued by a big, naked guy. There’s also a woman there, but she’s got clothes on and doesn’t seem to be paying attention.

All's well that ends well.
Unless you still need water from that well that you just filled in.
Posted by Chet Haase at 1/06/2012 1 comment: