Today is the day when we gather together
And digest as much as we can.
We eat way too much and we drink even more
With our friends and our family clan.

We celebrate something of pilgrims and Indians
Sharing their meat and their bread,
Taking a break from gathering harvest and
Beating each other till dead.

But mostly we gorge ourselves over and over
On everything we see before us,
Like turkey, potatoes, and stuffing and gravy;
A greasy, masticating chorus.

So I wish you a Happy Thanksgiving today;
May you eat till your stomach is puffed.
Inhale all you can of the food that you see.
In short, I wish you’d get stuffed. 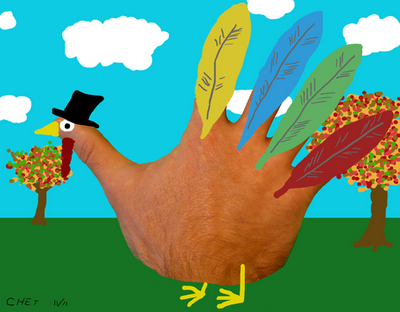 All journeys begin with a single step, as do falls from great heights.

All things come to he who waits, except the time wasted waiting around for things.

Don't burn your bridges behind you. But if you have to choose, it's probably better than burning them in front of you.

Don't change your horse in midstream, unless it's drowned. Then it's probably a pretty good time to find a different ride.
Posted by Chet Haase at 11/11/2011 No comments:

As is probably obvious by now, this blog is all about educating you, the innocent bystander that just happened to click on a link that took you here instead of to that site with cat videos that you were actually searching for.

In pursuit of that higher goal of learning, today's article is about the ancient Japanese art of making Sake, the rice wine traditionally consumed when you're in a Japanese restaurant feeling culturally open and guilty about the micro brew you really wanted instead.

I visited the Takara Sake plant in Berkeley yesterday, in an effort to understand more about this important element of alcoholism, and because it seemed like something to do on a Saturday afternoon. I highly recommend the visit as well as the tasting. But in case you can't make it there yourself, I thought I'd teach you a little about how Sake is made, gleaned from long minutes spent in the Museum of Wooden Things and from the video they showed (a very professional affair, interleaving scenes of serious artisans carrying bags of rice and windswept ponds).

First, it's important to realize that Sake is a true wine. You can tell this in the illustration on the right, from a diagram showing the steps of traditional sake making. In this step, we see the men stirring the rice with their feet. Despite access to the abundant wooden stirring implements that we'll see below and these things called "hands" (which the men in the picture clearly own), they chose to use their feet, realizing that this is what makes a real wine. 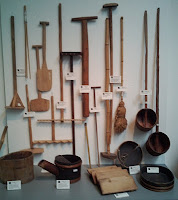 The next thing that struck me as I wandered through the large Room of Wooden Things was how many different types of buckets and sticks Sake making entails. There were placards and different names for all of them, but although my knowledge of Japanese is somewhat minimal (I can pronounce the word "Japanese", but after that it gets a bit sketchy), I'm fairly certain the translations of the placards would have said things like "large stick", "small bucket", "stick with handle", and "large, misshapen bucket". 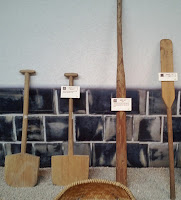 Of course, the previous display was just an initial sampling of the vast array of sticks and buckets they used. To the right was another set of sticks leaning casually up against another wall, as if after a long day of stirring.

There were also smaller sticks used, as seen to the left. 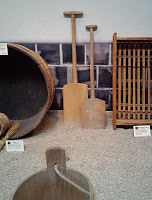 There were also sticks seen mingling with buckets,  foreshadowing the more complex tools seen below.

At this point, the tools got far more interesting as they started combining functions. For example, in this piece we see the powerful discovery of putting a stick into a bucket.

And in this exhibit, we see a fundamental leap in thinking as sticks and buckets got combined into wholly new stick-bucket tools.

The advances seen in the stick-bucket prototypes above were refined into these more advanced, and quite substantially longer production versions.

Perhaps the most important advancement in sake tooling came when another stick/bucket combination resulted in this triple combination of a long stick and two buckets.

The final, and quite startling, piece on display was this altogether new tool, neither a stick, nor a bucket, nor a stick-bucket combination. You can see it next to the flat sticks to the left. It is, obviously, a hedgehog.

That's all for today's lesson about sake making. I hope you learned as much as I did.